Despite the uncertain market startups will continue to thrive and survive

Market conditions are tighter, and while financings are still taking place, the pullback is real and is now showing in our data. Not all startups are guaranteed to survive, but that is always the case, regardless of market conditions. Some other startups will thrive through the harsh macro conditions and benefit from the experience.

After all that preamble… a record Half! 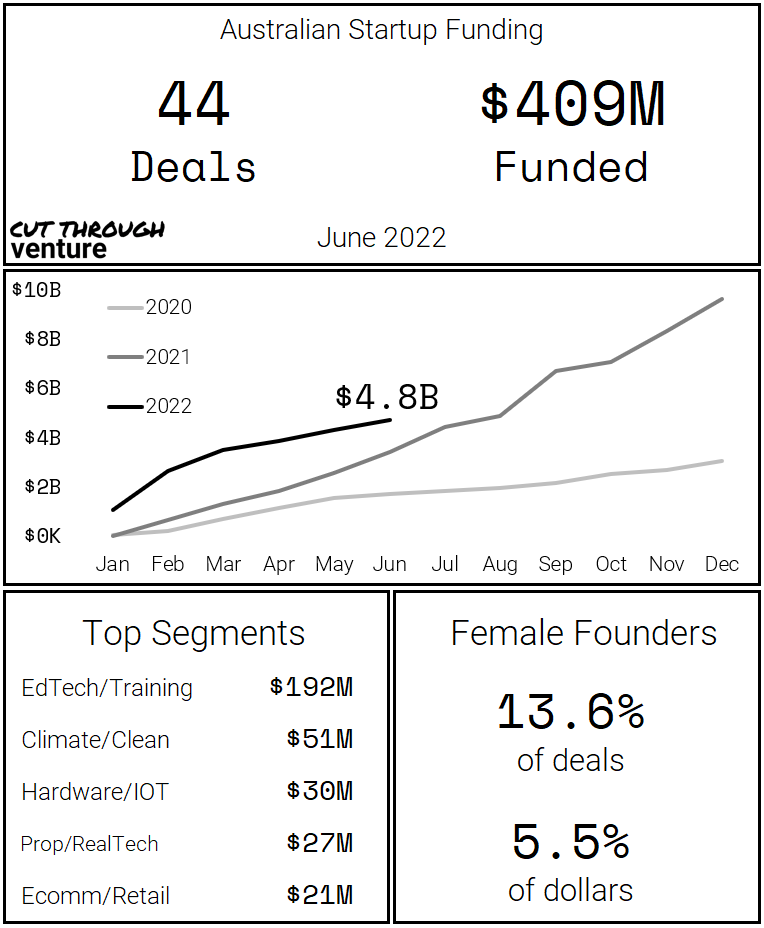 1H22 secured its spot in the record books as the largest ever month of Australian startup funding. As discussed last month, records like that mean very little, but recognising the milestone adds a little perspective to all the doom and gloom out there. June funding continued to bounce along just shy of $500M, and the number of announced deals dipped back below 50. Just one $50M+ deal was announced, with a flurry of activity within the $1M to $20M range. Many founders have highlighted the challenging fundraising conditions to us. We’ve heard everything from the ugly (certain unmentionable investors backing away from previously negotiated deals) to the expected (deals taking much longer to close). EdTech / Training topped the total funding charts for the first time since Go1 raised its behemoth $273M round back in July 2021. Fellow “do-gooder” sector Climate / Cleantech took out the second spot for capital raised and first overall for the total deal count. Fintech secured the nineteenth overall spot, with just a single deal for under $200K of funding. Fintech startups accounted for 25% of total funding that flowed to Australian startups in 2021. State of Origin rivalry trickled into funding markets, with QLD, NSW and VIC all neck and neck for the top funding spot. The Blues took out the top spot for deal count, followed by the Victorians. Thanks to Go1, the sunshine state took honors for most capital raised. Deals are still happening. Show me some attention, please? Outdoor advertising software tracker startup Veridooh, which lessens the black-box factor from outdoor advertising campaign performance, received backing from local investors. To support its expansion plans into the US, marketing analytics provider Mutiny raised a seed round led by several angel executives from key customers. Cloutly, which de-clunkifies the process for driving customer reviews, raised pre-seed funding. Let’s take this online. Government-backed Australian Business Growth Fund delivered a chunky investment to last-mile delivery startup HUBBED, so that no Australian need leave their home for online shopping deliveries again. And, so we never need to leave for a new suit either; made-to-measure male stylistas InStitchu raised a pre-IPO round to help support the productisation of their own custom garment manufacturing software into a new SAAS product. Car subscription software startup Loopit raised an international expansion seed round from local investors. Speedlancer, a freelancer marketplace offering ultra-speedy design, writing, and data entry services, raised funding from US investors. Death: the only thing we’re willing to predict right now. Death disruptors Bare and Willed both raised capital from local investors. Bare focuses on bettering the ‘back-end’ after-death (funeral) experience for grieving families, while Willed has modernised the ‘front-end’ estate planning process. Brick by brick. Fergus, a tradie job management platform founded by a former Kiwi plumber, secured a sizable capital injection from European VC Octopus Ventures to accelerate expansion across the UK. Archistar, which gives architects, planners and developers instant information on the type of residential projects permitted on a site, given local planning and zoning rules, raised in preparation for its US launch. To fuel further expansion into the UK and US, AI-powered stormwater and sewerage pipeline maintenance software provider VAPAR raised a seed round.